Cells – The Foundation of Life 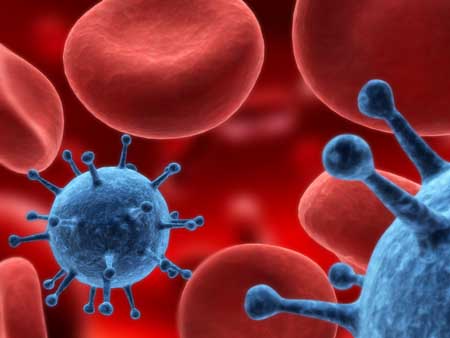 Cells are the smallest structural and functional units of all living organisms, from bacteria with a single cell to humans who have more than 100 trillion cells.

There are two main categories of cells, prokaryotes and eukaryotes. Prokaryotes are single cell organisms such as bacteria and were the first cells to evolve. For billions of years, they were the only life on earth. They are simple cells with no true nucleus or organelles. Eukaryotic cells evolved later and are larger with a nucleus and numerous organelles.

The majority of cells are too small to see with the naked eye so for most of recorded history their existence was unknown. It was not until the development of the microscope that the world of cells was revealed.

In the mid-1600s, Antoni van Leeuwenhoek (1632-1723), a Dutch merchant, became interested in magnifying lenses while working in a dry goods store where he used them to count the threads in cloth. He started grinding and polishing his own lenses and eventually produced a microscope with a 270x magnification. Leeuwenhoek used his microscopes to discover bacteria and protists, which he called animalcules.

Around the same time in England, inventor-philosopher-naturalist Robert Hooke (1635-1703) furthered microscopy by developing a compound microscope that uses two or more lenses to increase magnification and visual clarity. When Hooke put a dried piece of cork under the microscope, its boxlike structure reminded him of the small rooms of a monastery. So he called the structures cellula, which means “small room” in Latin.

As microscopes became more powerful, scientists were able to view cells in more detail and to identify the nucleus and cytoplasm which moved around the cell in a swirling movement, suggesting that cells were living entities. In 1838, two German scientists, botanist Matthias Schleiden (1804-81) and physiologist Theodor Schwann (1810-82), announced that cells were the elementary particles of organisms. Many expressed skepticism over his and Schleiden’s findings until twenty years later when German pathologist Rudolf Virchow (1821-1902) made his famous statement that all cells come from other cells. The observations of Schleiden, Schwann, and Virchow formed the basis of cell theory, which today has the following four parts: 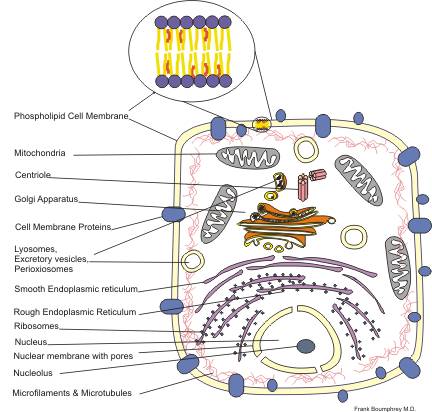 Organelles and Their Function

The typical human cell is comprised of an outer membrane that contains a gel-like substance called cytoplasm which holds the organelles. Just as our organs control the body’s processes, organelles control the function of an individual cell. 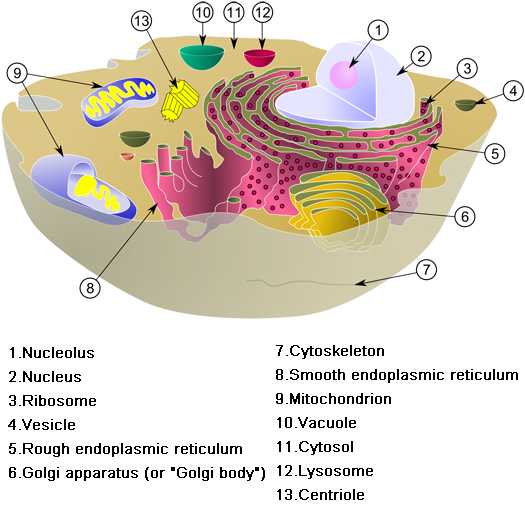 Nucleus is considered the cell’s brain. The nucleus controls all the activities carried out within the cell. The nucleus is made up of a nuclear membrane, chromatins and a nucleolus. It is also where the chromosomes are located.

Cell membrane gives shape and structure to the cell as well as providing protection. It is selectively permeable, meaning it can control which substances enter and leave the cell.

Ribosomes are tiny round structures made of RNA and protein enzymes. The synthesizing proteins.

Mitochondria are the cell’s engine. Mitochondria are responsible for breaking down sugar molecules to release adenosine triphosphate (ATP), which transports energy within the cell for metabolism.

Golgi bodies are sac-like structures that distribute proteins to other parts of the cell.

Lysosomes contain enzymes which help break down larger molecules. Lysosomes also transport waste out of the cell.Vacuoles store food and water. They can also store waste material before it is transported outside the cell by the lysosomes.
Cell Movement:
There are several mechanisms of transport that enable cells to move materials into or out of the cell: diffusion, osmosis, facilitated diffusion, active transport, filtration, phagocytosis, and pinocytosis. Some of these take place without the expenditure of energy by the cells while others require energy in the form of ATP.

Reproduction is an integral part of a cell’s function. Mitosis is the process used by a somatic cell, meaning a non-germ cell, to create two usually identical daughter cells. During mitosis chromosomes are duplicated once and cell divides once, meaning each daughter cell has the same number of chromosomes as the original cell. This is a vital process in normal organism development. The stages of mitosis are prophase, metaphase, anaphase, and telophase. 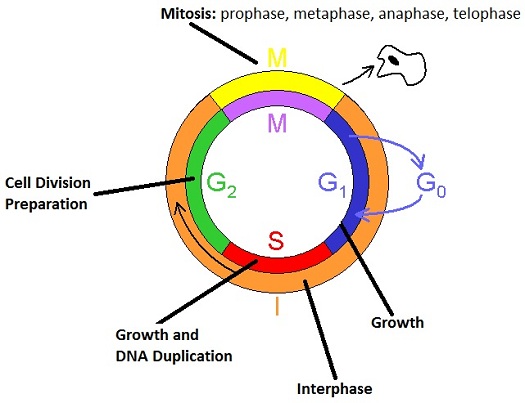 Every now and then, the daughter cell may turn out differently because of a mutation, which is a permanent change in the DNA sequence that makes up a gene. A mutation occurs when a DNA gene is damaged or changed in a way that alters the genetic message carried by that gene.

Meiosis is the cell division process that creates eggs and sperm, known as germ cells.

During meiosis, chromosomes are also duplicated once but cell division occurs twice, resulting in the four daughter cells having only half of the chromosome number found in the original cell. However, when the male and female germ cells, called gametes, merge, the resultant fertilized egg has the full set of chromosomes.

The Life of Cells

While cells cannot live independently, each individual cell in the body is alive. And their needs are the needs of the organism. For example, humans need energy (in the form of food) and water because the body’s cells need food and water. Cytologists have determined that all cells are primarily composed of carbon, hydrogen, oxygen, nitrogen, phosphorus, and sulfur. Cells are differentiated from nonliving material containing those elements because they have a specialized organization, maintain a boundary, regulate their own activity, and possess a controlled metabolism.

The human body has more than 200 different cell types. All of them have three basic features. The first is a plasma membrane. The second is cytoplasm which contains fluid and organelles that carry out the basic functions of the cell, including protein synthesis, reproduction, and metabolism. The third basic feature is genetic material in the form of DNA and RNA. Beyond those similarities, cells are vastly different in form and function.

It would not be until the 1960s that the existence of stem cells and their role in that differentiation was finally proven.

Most adult cells in the body have a tissue-specific function that cannot be changed. For example, a liver cell cannot transform itself to transmit electrical impulses; nor can a neuron develop photoreceptors. Stem cells, though, are not tissue specific. They have no specialized function in and of themselves; they cannot transport oxygen like a red blood cell or contract like a muscle cell. What stem cells can do is produce specialized cells of all kinds in a process called differentiation. There are several known factors that trigger differentiation such as chemicals secreted by other cells and physical contact with other cells. For over a hundred years scientists have worked to unravel the exact process of differentiation. So far, these research efforts have only been partially successful. But they offer enough promise to make stem cell research one of the most vibrant fields in science today.

Protein synthesis is the process that describes how enzymes (and other proteins) are made from DNA. This process is important because human development, growth, and all metabolic activities that take place within the cell are guided by the DNA in chromosomes. Chromosomes remain in the cell’s nucleus. So while DNA information will determine whether the cell will be an alligator, a human, or the establishment of certain characteristics of a human cell, it must transfer this information from its center. For example, if during development a cell becomes the cell in the iris of an eye, the DNA will direct other information appropriate for its location. DNA controls the cell in this manner because it contains codes for polypeptides. Many polypeptides are considered enzymes that not only regulate chemical reactions but also influence the resulting characteristics of a cell. Therefore, traits are the end products of the activities of these enzymes. A gene is defined as a DNA segment that codes for a particular enzyme.

There are three steps in protein synthesis:

Step 1. Transcription is where DNA molecules are used as a template to create RNA. Three types of molecules are formed during this stage, Messenger RNA (mRNA- is a single strand that will provide the template to form polypeptides), Transfer RNA (tRNA- is a short RNA molecule that is used for transporting amino acids), and Ribosomal RNA (rRNA- are the building blocks for ribosomes).

Step 3. Translation is when the final processed RNA molecules are then used to assemble amino acids into polypeptides.

Cells are the physiological foundation of life on Earth. Over time, they have evolved into a vast variety of specialized, differentiated cells that in turn work in concert to form more advanced structures. The next lesson explores some of the main types of tissues, cells, and their functions.