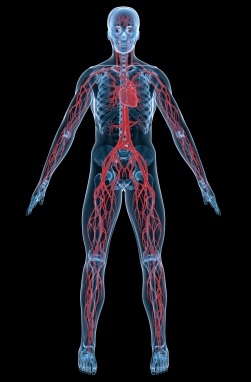 The cardiovascular (or circulatory) system is like a superhighway, it reaches all parts of the body, bringing nutrients and oxygen to cells, then hauling away wastes and carbon dioxide. It is also the avenue through which hormones are distributed throughout the body.

The circulatory system has three primary components: the heart, blood, and blood vessels.

The heart, also known as the cardiac muscle, is a biological miracle of sheer power and sturdiness. The heart of an average person beats over 100,000 times a day; that’s almost 38 million times a year and around three and a half billion beats in a lifetime. Every day the heart pumps around two thousand gallons of blood. 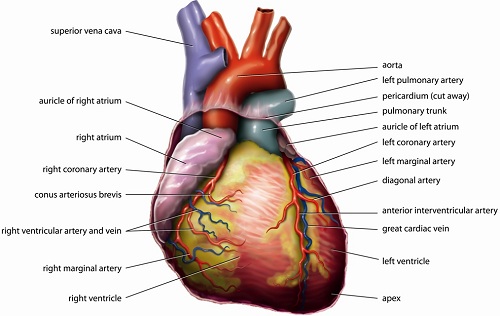 The left ventricle is the largest and strongest chamber, because it is the chamber that pushes blood through the aortic valve and into the body.

There are four heart valves, each with a specific function, that regulate blood flow through the heart.

One complete heartbeat, called a cardiac cycle, has two phases, systole and diastole.

In the systole phase the ventricles contract, pushing blood into circulation. To prevent blood from flowing backwards into the atria during systole, the atrioventricular valves, the mitral, and tricuspid close. That closure is what creates the first audible sound, S1, of a heartbeat.

When the ventricles finish contracting, the aortic and pulmonary valves, also called the semilunar valves, close to prevent blood from flowing back into the ventricles. This closure is what creates the second heartbeat sound, S2 . The ventricles then relax and fill with blood from the atria and the process starts all over again.

The rhythmic beating of the heart is controlled by an electrical impulse. The sinoatrial, or SA node, is a small area of tissue in the wall of the right atrium. The SA node, often referred to as the pacemaker, sends out an electrical signal that first causes the atria to contract; then the impulses travel down to the atrioventricular, or AV node, which acts as a relay. The electrical signal passes through the AV node and travels through the right and left ventricles, causing them to contract and force blood out into the major arteries.

Systemic circulation is the system of blood vessels and associated tissues that supplies oxygen through the blood to all parts of the body, and brings CO2 back to the heart for oxygenation in the lungs. Generally speaking, blood moves out of the left ventricle through the aorta, is dispersed to other arteries which branch into arterioles then capillaries before being collected by veins and returned to the right atrium through the superior and inferior vena cava. Superior and inferior refer to their location above and below the heart.

From the right atrium, blood moves to the right ventricle, where it is pumped into the pulmonary circulation for more oxygen.

The blood flowing into the right atrium is low in oxygen and high in CO2. To remove the carbon dioxide and replenish the oxygen, the blood passes into the right ventricle, which pumps it into the double-branched pulmonary artery. The right branch goes to the right lung, the left branch into the left lung. These arteries eventually branch into capillaries throughout the lungs, which are filled with millions of tiny air sacs called alveoli. The blood in the capillaries get an oxygen refill at the same time the CO2 is removed in a process called oxygenation. When we exhale, we are releasing CO2 into the environment. 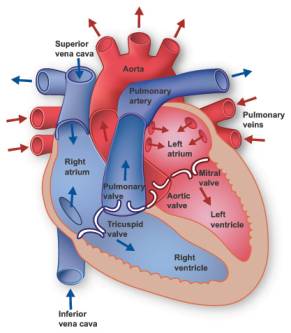 On a cellular level, oxygenation occurs when oxygen locks onto a protein molecule called hemoglobin, which is what gives red blood cells their color. The newly oxygenated blood exits the lungs through the pulmonary veins and goes back to the heart. It enters the heart in the left atrium and then flows into the left ventricle, which pumps it out into systemic circulation.

The human body contains approximately 10 pints of blood. Whole blood is a mixture of blood cells and plasma.

There are three types of blood cells, each of which is produced in bone marrow:

In addition, there are three types of white blood cells (leukocytes):

In babies and young children, most bones in the body produce blood cells. But as we get older, blood cells are predominantly made by the marrow of the vertebrae, ribs, pelvis, skull, and sternum plus specific parts of the humerus and femur.

Plasma is the yellowish liquid part of the blood that carries the blood cells and other components throughout the body. Approximately half (55%) of the blood in a body is composed of plasma, which is produced in the liver and is 90 percent water. Plasma also contains nutrients, proteins, hormones, and waste products.

There are around 60,000 miles of blood vessels in the human body if you were to string them all together in a single line. 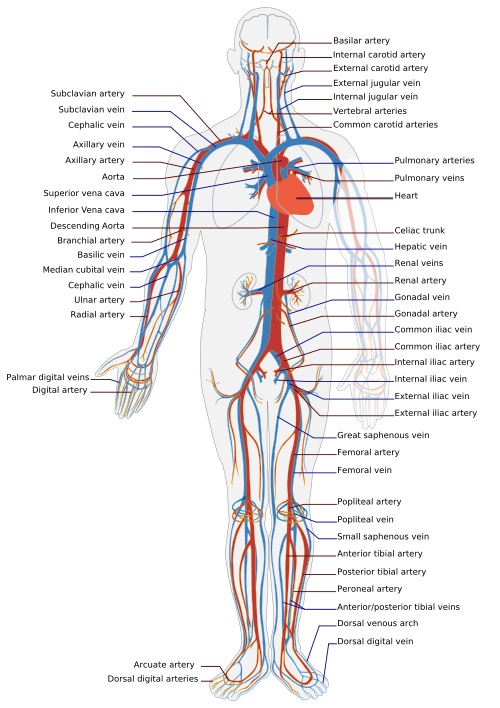 There are three main types of blood vessels: 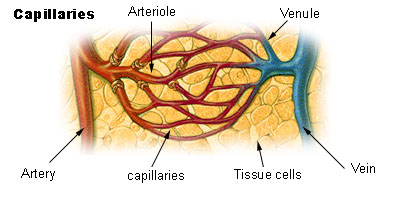 The walls of arteries and veins have three layers, although they are thinner and more rigid in veins:

The cardiovascular system pumps blood through an assortment of vessels that nourish and oxygenate cells while removing waste and CO2. However, it’s not the only vessel system in the body. The next lesson covers the lymphatic system, which is a key to keeping us healthy and germ free.

The Cardiovascular System under 10 minutes