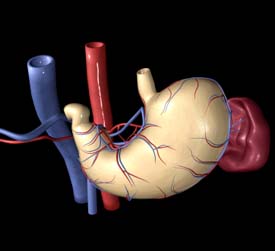 The digestive tract is basically a long tube, about 30 feet in total length, which starts at the mouth and ends at the anus, traveling through various organs that play a part in digestion.

The digestive system is important because food, whether liquid or solid, has to be broken down into molecules of nutrients so that they can be absorbed into the blood and transported to the body’s cells.

In addition, the digestive system also excretes unusable solid food byproducts from the body in the form of feces. 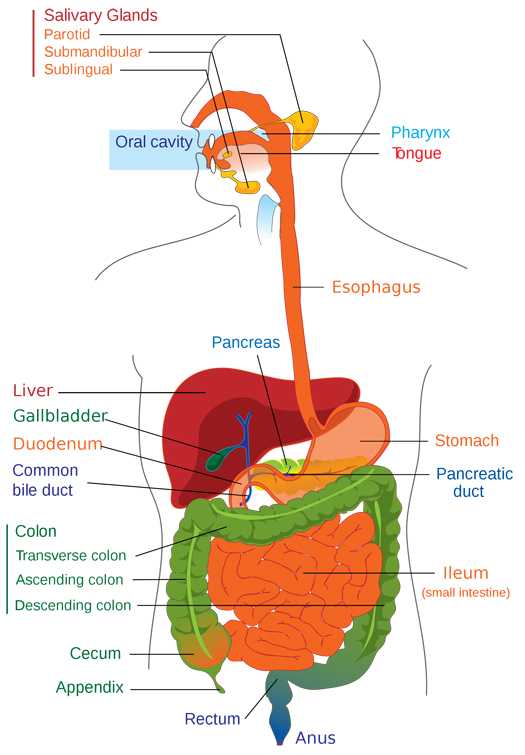 The digestive system has two major parts, the gastrointestinal (GI) tract and the accessory organs.

Each of these organs is lined with mucous membranes, collectively called mucosa. The membranes in the mouth, stomach, and small intestine contain glands that produce digestive juices to help break down food. The digestive tract also contains a layer of smooth muscle that assists in breaking down food and moves it along the tract.
Food moves from one organ to the next through a wave like involuntary muscle movement called peristalsis. So while the act of swallowing is voluntary, once the food is in the esophagus, the nervous system takes over using peristalsis.
Accessory Organs

These organs include the teeth, the tongue, salivary glands, liver, gallbladder, and the pancreas.

Digestion begins the moment we put food in our mouth, beginning with chewing and with our saliva, which contains enzymes that break starches down into smaller carbohydrate molecules. When we swallow, a structure called the epiglottis covers the trachea, or windpipe, so food doesn’t fall into it and choke us. 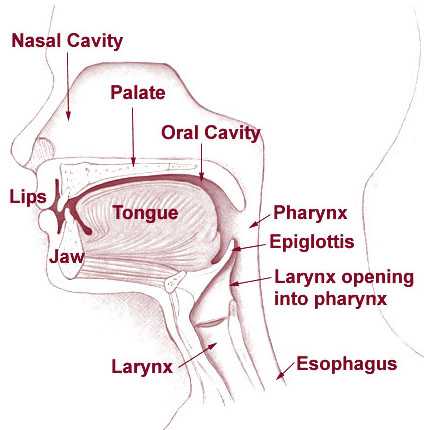 The chewed clump of food we swallowed, called a bolus, makes its way down the esophagus and into the stomach. The stomach has three primary functions:

The stomach, which is filled with gastric acid, churns the boluses with the gastric acid to break them down into smaller bits. The food-gastric acid mixture is called chyme.

The chyme eventually leaves the stomach and travels through the small intestine, which has three areas: duodenum (beginning), jejunum (middle), and ileum (end). The average adult small intestine is about 20-25 feet long.

The liver and the pancreas produce digestive juices which are passed to the small intestine through small tubes called ducts. The pancreatic juices help the body digest fats and protein. Bile from the liver helps with fat absorption. The bile produced by the liver is stored in the gallbladder until needed in the intestine.

The liver is the largest solid organ in the body, weighing on average around three and a half pounds. It’s also the largest gland, as it secretes bile.

The bile produced by the liver emulsifies fat into smaller droplets that are easier for the digestive system to process. When food containing fat reaches the duodenum, the body secretes a hormone called cholecystokinin (CCK), which prompts the release of bile into digestive tract.

The liver also works as a filter to remove products from the bloodstream which we don’t need or that could be harmful, such as alcohol from liquor.

When the blood reaches the intestines, a set of capillaries takes the blood to the liver, which filters out any products that the body does not need and deposits them back into the digestive tract to be excreted either in urine or in feces.

Chyme can spend up to four hours passing through the small intestines and by the end is a thin watery liquid containing the digested molecules of food that are ready to be absorbed into the bloodstream.

The mucosa of the small intestine is covered with tiny fingerlike projections called villi. The villi, in turn, are covered with microscopic projections called microvilli. These structures create a vast surface area through which nutrients can be absorbed. Specialized cells allow absorbed materials to cross the mucosa and into the blood, where they are carried off in the bloodstream to other parts of the body for storage or further chemical change.

The Break Down of Food

Different types of food each have different digestive processes.

Proteins must be digested by enzymes before they can be used to build and repair body tissues. An enzyme in gastric acid starts the digestion of ingested protein, which is continued in the small intestine where enzymes from the pancreatic juice and the lining of the intestine complete the break down of protein molecules into amino acids.

The digestion of carbohydrates begins when enzymes in the saliva and pancreatic juice break it down into simpler molecules called maltose. An enzyme in the lining of the small intestine then splits the maltose into glucose molecules that can be absorbed into the blood. Glucose is carried through the bloodstream to the liver, where it is stored or used to provide energy.

Sugars, on the other hand, are digested in one step. An enzyme in the lining of the small intestine digests sucrose, the same sugar we use to sweeten our drinks and cook with, into glucose and fructose, which are absorbed through the intestines into the blood. Another type of sugar, lactose, which is found in milk, is also broken down by another enzyme in the intestinal lining called lactase. A deficiency in lactase is what makes people lactose intolerant.

Fats, or lipids, are organic compounds composed of carbon, hydrogen, and oxygen. They do not dissolve in water and are not easily broken down by fat digesting enzymes so fats tend to take longer to digest than carbohydrates or proteins.

Fat digestion doesn’t really begin until it reaches the duodenum where it encounters the pancreatic enzyme lipase, which breaks up lipid molecules into fatty acid and glycerol molecules. Bile emulsifies the fats into smaller droplets which are suspended in the watery chyme, making it easier for the lipase to then break down the fats.

In addition to capillaries, there are also lymph vessels and lacteals in the villi. The lacteals absorb the fatty acids and glycerol into the lymphatic system which eventually drains into the bloodstream, after which they are either used for energy or stored for future use. 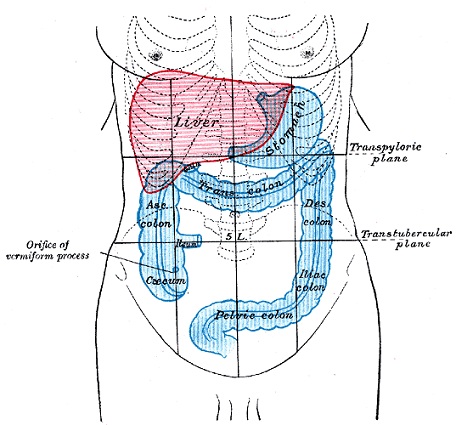 The ileum is connected to the large intestine by a pouch called the cecum. The appendix, which has no known modern function, is attached to the cecum. Food travels from the cecum upward in the ascending colon, across the transverse colon, and then down the descending colon, where it then goes through the sigmoid colon, which connects the descending colon with the rectum. As the food travels through the large intestine water is removed along with various chemicals until what is left is solid waste, called feces, that is unusable by the body. The feces is stored in the rectum until excreted through the anus.

The Endocrine System’s Role in Digestion

Cells in the mucosa of the stomach and small intestine produce hormones that control the functions of the digestive system. These hormones stimulate digestive juices and cause organ movement.

There are three primary hormones that control digestion:

Other hormones in the digestive system regulate appetite. Ghrelin, is produced in the stomach and upper intestine when there is no food present; this stimulates the appetite.

Peptide YY is produced in the digestive tract in response to food and inhibits appetite.

The Role of the Nervous System in Digestion

The extrinsic nerves arrive at the digestive organs from the brain or the spinal cord and release acetylcholine and adrenaline.

Acetylcholine prompts the muscles of the digestive organs to squeeze harder to propel food through the digestive tract. It also directs the stomach and pancreas to produce more digestive juices.

Adrenaline does the opposite; it relaxes stomach and intestine muscles and decreases the flow of blood to these organs, which slows or stops digestion.

The intrinsic nerves are embedded in the walls of the esophagus, stomach, small intestine, and colon. These nerves are triggered when the walls of the hollow organs are stretched by food, prompting them to release substances that either speed up or delay the movement of food and the production of juices by the digestive organs.

The digestive system breaks food down into usable molecules and supplies the body with fuel and works in conjunction with the circulatory, nervous, and endocrine systems. Solid wastes are eliminated through the large intestine-rectum-anus trio. The next lesson explains how liquid waste is eliminated from the body.