The lymphatic system is comprised of very tiny vessels, or tubes, that drain fluid from around cells all over the body. The primary structures of the lymphatic system are the bone marrow, spleen, thymus gland, lymph nodes, and the tonsils.

The main functions of the lymphatic system are as follows:

Just as in the cardiovascular system, lymph fluid is carried by vessels, in this case lymph capillaries, which have many tiny openings that allow gases, water, and nutrients to pass through and allow waste products in.

Lymph capillaries are found in all regions of the body except the bone marrow, central nervous system, and tissues that lack blood vessels. The wall of the lymph capillary is composed of overlapping squamous cells that form a one-way valve which permits fluid to enter the capillary but prevents lymph from leaving the vessel. 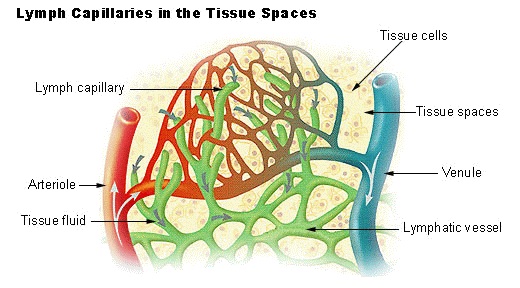 The lymphatic system is probably best known for defending the body against disease by having the lymph nodes and other lymphatic organs filter the lymph to remove microorganisms.

Lymph nodes are bean shaped glands primarily found in the neck, armpit, and groin areas. Nodes are also located along the lymphatic pathways in the chest, abdomen, and pelvis, where they filter the blood. Lymph nodes contain T and B lymphocytes, known as T cells and B cells.

T cells are produced in the bone marrow. From there they go to the thymus to develop. Once mature, they are found in the blood and in the lymph nodes. When T cells encounter an infectious agent, they quickly divide and produce large numbers of new T cells that are sensitive to that type of particular microorganism. More than 80 percent of lymphocytes in the circulating blood are T cells. 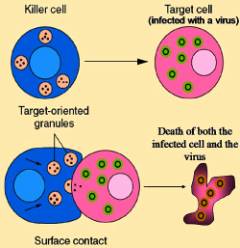 There are two main groups of T cells, killer cells and helper cells.

B cells are immature lymphocytes. About 10 percent of lymphocytes that circulate in the blood are B cells, which produce proteins called antibodies that are located around the cytoplasm. Antibodies attach to foreign proteins in the body called antigens that are found on the surface of certain microorganisms, which starts the process of killing the antigen. The process of B cells protecting the body is called humoral immunity.

There are certain antigens that cause B cells to change into plasma and memory cells in the spleen. The plasma cells make and release antibodies. The memory cells do not release antibodies but they remember the antigens they were exposed to in the past so that they can deal with these more quickly if exposed again in the future. This is the process that allows for vaccines, which expose the body to low levels of certain antigens, such as small pox or measles, so that the memory cells can be prepared to fight them if the body is exposed at some point in the future. Memory cells can survive in the body for many years.

The lymphatic system absorbs fats and fat-soluble vitamins from the digestive system.

The small intestine is lined with mucus membranes that are covered with finger like projections called villi. Each villus contains blood capillaries and special lymph capillaries, called lacteals. The lymph in the lacteals is called chyle.

The blood capillaries absorb the majority of nutrients, but the fats and fat-soluble vitamins are absorbed by the lacteals. These molecules are transported by way of larger lymphatic vessels to the thoracic duct which empties into the left subclavian vein.

The thymus is located in front of the aorta and behind the sternum. Its primary function is to house maturing T cells. While in the thymus, the lymphocytes do not respond to pathogens. But once mature, they enter the blood to provide defense against disease. The thymus also produces a hormone, thymosin, which stimulates the maturation of lymphocytes in other lymphatic organs.

The spleen is located in the upper left abdominal cavity, beneath the diaphragm and behind the stomach. As the largest lymphatic organ in the body, the spleen consists of two types of tissue, white pulp and red pulp. 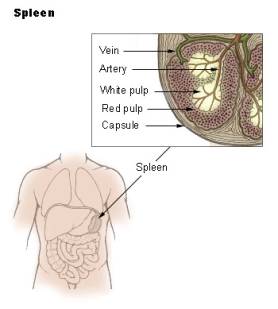 The white pulp is lymphatic tissue consisting primarily of lymphocytes around arteries. The red pulp consists of venous sinuses filled with blood and lymphatic cells, including lymphocytes and macrophages.

The spleen, along with the liver, removes old and damaged red blood cells, also called erythrocytes, from circulation.

The sinuses in the spleen store blood. In emergencies such as a hemorrhage or significant loss of blood, the spleen contracts to squeeze the reserve blood into the general circulation.

The tonsils are clusters of lymphatic tissue that line the nose, mouth, and throat (pharynx). Lymphocytes and macrophages in the tonsils protect the body against pathogens that try to enter the body through the nose or mouth. There are three groups of tonsils.

Pharyngeal tonsils are located near the opening of the nasal cavity into the pharynx. When these tonsils become enlarged they are called adenoids.

The palatine tonsils are located near the opening of the oral cavity into the pharynx. These are the tonsils that can be seen at the back of the throat.

Lingual tonsils are located on the rear surface of the tongue, which also places them near the opening of the oral cavity into the pharynx.

The lymphatic system works alongside and in conjunction with the circulatory (cardiovascular) system to maintain fluid balance, transport fats after digestion, and act as part of the immune system. The next lesson explains how the respiratory system helps keep the body supplied with oxygen, the cellular fuel that keeps the cells functioning.