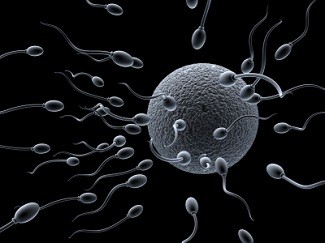 Since the beginning of civilization, people have known that offspring, whether plant, animal or human, shared characteristics with their parents. The ancient Egyptians used this knowledge to develop cross-pollination techniques that allowed them to produce better crops.

Throughout history, there were many ideas as to how exactly traits were passed along. But it was Aristotle who came up with the theory that would be accepted for almost two millennia. According to Aristotle, sperm was purified blood, which was more pure than a woman’s blood. So the combination of sperm and a woman’s menstrual blood is what created the embryo. Because a man’s blood was more pure, sperm was the actual source of life while the woman’s blood contributed to the physical formation of the child.

It wasn’t until the development of the microscope by Anton van Leeuwenhoek that scientists were finally able to see inside cells. Research by Leeuwenhoek and William Harvey in the 17th century led to the discovery that female animals produced eggs. From there it was discovered that it was the union of the female’s egg and the male’s sperm that resulted in an embryo.

But there was still disagreement as to what the egg and the sperm contributed. Kaspar Wolff proposed that the egg and sperm actually contained particles of some kind that directed how the embryo would grow.

Gregor Mendel’s experiments with breeding pea plants indicated outward appearance, or phenotype, of offspring was determined by its genotype, or genetic factors. Eventually, Mendel would be recognized as the father of genetics and his theories would tie together an explosion of discoveries.

In 1953, James Watson and Francis Crick realized that DNA must be constructed as a double helix, or the shape of a twisted ladder. The sides were a spine made up of the sugar and phosphate molecules and the rungs of the ladder were the base A-T/G-C pairs, which is how C always combined with G, and A with T.

This structure also explained how DNA replicated, or reproduced, itself. When the helix unzipped down the middle, two identical double helixes were then formed because bases would join with its complementary partner to form a new helix. Once the structure of DNA was understood it helped explain the mechanics of our reproductive system on a cellular level. For example, human beings have 23 pairs of chromosomes (or 46 chromosomes), defined clusters of DNA, which carry more than 20,000 individual genes. Thanks to the process of meiosis, sex cells are produced carrying 23 chromosomes each, so when a sperm fertilizes an egg, the resulting zygote has the full complement of 46 chromosomes.

In addition to being the means for creating new human beings, the reproductive system is also responsible for internal and external changes during puberty, as boys and girls physically mature into men and women.

Men have reproductive organs, or genitals, inside and outside the pelvis. 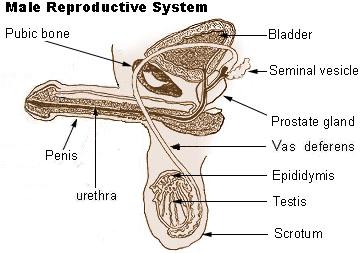 The testicles, which are contained in the scrotum, are also considered part of the endocrine system because they produce hormones including testosterone, which is what causes men to develop deeper voices, bigger muscles, body and facial hair, and it also stimulates the production of sperm once a young man reaches sexual maturity. The two testicles produce and store millions of sperm cells.

The seminal vesicles and the prostate gland, collectively called the accessory glands, provide fluids that lubricate the duct system and nourish the sperm.

The seminal vesicles are attached to the vas deferens. The prostate gland, which produces some of the seminal fluid, encompasses the ejaculatory ducts at the base of the urethra, just below the bladder.

The urethra is the channel inside the penis that transports the semen out of the body through a tiny opening in the glans, or head, of the penis. The urethra is also part of the urinary system because it is also used to expel urine from the male body.

The penis has two parts: the glans and the shaft. The tissue inside the shaft can expand, which allows for erections.

During puberty, testosterone and other hormones cause the seminiferous tubules located in the testicles to produce sperm, which look like a tadpole, with a tail and head. The head contains DNA. 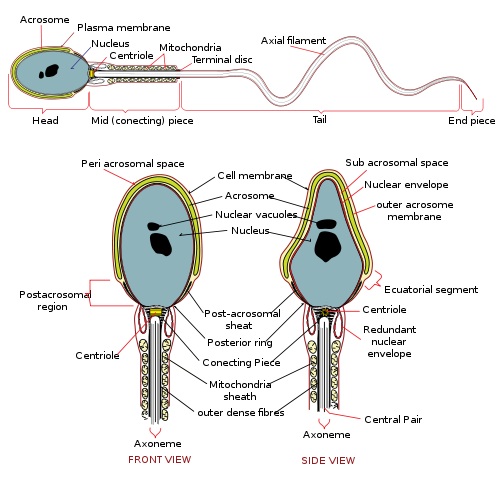 The sperm use their tails to propel themselves into the epididymis, where they mature. A mature sperm cell (called spermatozoa) is about 0.05 millimeters long. It takes sperm four to six weeks to travel through the epididymis and move to the vas deferens, or sperm duct.

When a male is sexually stimulated, the seminal vesicles and prostate gland produce a whitish liquid called seminal fluid, which mixes with sperm to form semen. Arousal also causes tissues in the penis to fill with blood, causing an erection. When the erect penis is stimulated, muscles around the reproductive organs contract, forcing the semen out of the urethra, a process called ejaculation. A typical ejaculation contains at least 100 million sperm.

The female reproductive system is located in the pelvis.

The external part of the female reproductive organs is called the vulva, which covers the opening to the vagina. Two pairs of skin flaps called the labia surround the vaginal opening. A small sensory organ called the clitoris is located toward the front of the vulva where the folds of the labia meet. Between the labia are openings to the urethra and vagina. Once girls become sexually mature, the outer labia and the mons pubis are covered by pubic hair.

The internal female reproductive organs are the vagina, uterus, fallopian tubes, and ovaries.

The vagina is a hollow tube that extends from the vaginal opening to the uterus. The average vagina is about three to five inches long in an adult. The vagina has muscular walls that enable it to significantly expand and contract. So it can be snug enough to keep a tampon in place or stretch wide enough to let a baby pass through during birth. The vaginal walls are lined with mucous membranes to keep it moist and protected.

The vagina has multiple functions:

The vagina connects with the cervix, which is the lowest, narrow end of the uterus, or womb.

During childbirth, the cervix expands to accommodate the baby.

The uterus has a thick lining and muscular walls that expand and contract to accommodate a growing fetus and to help push the baby out during labor. Unless a woman is pregnant, the uterus is only about three inches long and two inches wide.

The uterus is connected to the ovaries through the fallopian tubes. The ovaries are also part of the endocrine system because they produce female sex hormones such as estrogen and progesterone.

Baby girls are born with ovaries filled with hundreds of thousands of eggs. The ova remain dormant until puberty, at which point the pituitary gland produces hormones that stimulate the ovaries to produce the female sex hormones, including estrogen. The secretion of these hormones causes a girl to sexually mature and begin ovulating, which typically occurs once a month.

During ovulation, the ovaries release eggs into the fallopian tubes, which are no wider than a sewing needle. The fallopian tubes are lined with tiny hairs that push the egg toward the uterus.

If the egg is not fertilized while in the fallopian tube, it dries up and exits the body about two weeks later, along with blood and tissue from the inner lining of the uterus, in a process called menstruation. A girl’s first period is called menarche.

Many women experience abdominal cramps during the first few days of their periods, which are caused by chemicals called prostaglandins that make the smooth muscle in the uterus contract.

If the egg is fertilized, the woman’s body immediately shifts into baby mode. The fertilized egg cell, called a zygote, begins dividing and after a week becomes a multicelled organism called a blastocyst, a hollow sphere of cells filled with fluid. The blastocyst attaches to the lining of the uterus, called the endometrium, in a process called implantation.

As cells from the blastocyst grow, the embryonic stage of development begins, during which cells begin to specialize. By the time the embryo is eight weeks old, the brain, nerves, heart, stomach, intestines, muscles, and skin have formed.

The fetal stage lasts from approximately nine weeks after fertilization to birth. During that time the cells of the fetus continue to multiply and differentiate.

While in the uterus, the fetus floats inside the amniotic sac filled with fluid that cushions the fetus. The fetus receives oxygen and nourishment from the mother from the placenta, a temporary organ that joins the mother and fetus. The placenta, which is rich in blood vessels, also enables the release of carbon dioxide and waste products from the fetus.

Pregnancy lasts between nine and ten months. When the baby is ready for birth, its head presses on the cervix, which begins to relax and widen in preparation for the baby to pass into, and through, the vagina, often referred to as the birth canal in this context.

The pituitary hormone oxytocin prompts the walls of the uterus to start contracting, which causes the cervix to widen. After several hours of widening, the cervix is dilated enough for the baby to come out of the uterus. The baby is pushed out of the uterus, through the cervix, and along the birth canal. The baby’s head typically emerges first; the umbilical cord comes out with the baby and is cut after the baby is delivered.

After the baby is born, the uterus pushes out the placenta, along with the fetal membranes, collectively called the afterbirth.

Controlled in large part by the endocrine system which releases hormones that prompt sexual maturity, the reproductive system enables us to propagate the human species. Each gender has unique sex organs to accomplish reproduction.