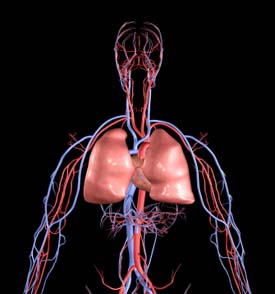 The primary function of the respiratory system is to keep the blood oxygenated by inhaling oxygen and exhaling carbon dioxide. The system is divided into two parts.

The upper respiratory tract is comprised of the following:

The lower respiratory tract is comprised of the following:

The lungs are the main organs of our respiratory system. They are located in the upper part of our chest on either side of the heart. The lungs are covered in a membrane called the pleura that enables the lungs to move smoothly when we breathe.

The lungs are separated from each other by the mediastinum, an area that contains the heart and its vessels, the trachea, esophagus, and thymus.

The act of breathing consists of two phases, inspiration and expiration.

Inspiration (when you inhale) is the process where oxygen enters the respiratory system through the mouth and the nose. The nasal passages contain mucous that helps filter out contaminants like dust or pollen that can cause irritation. These contaminants are forced out of the respiratory tract by coughing or sneezing.

The nasal passages contain mucus membranes that warm and humidify the breathed in air in order to prevent the trachea from becoming dry.The air passes from the nose and mouth through the larynx, which prevents food or liquid entering the respiratory tract. The air then enters the trachea.

In the chest, the trachea splits into two smaller tubes called the bronchi. Each bronchus then divides again forming the bronchial tubes, which lead directly into the lungs where they divide into many smaller tubes that connect to tiny, spongy air sacs called alveoli. 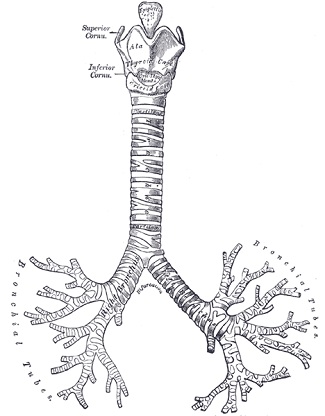 The average adult’s lungs contain about 600 million alveoli, which are surrounded by capillaries. The inhaled oxygen passes into the alveoli and then diffuses through the capillaries into the arterial blood.

Below the lungs is a muscle called the diaphragm that plays an important role in respiration. During inhalation, the diaphragm contracts, creating a vacuum that helps pull air into the lungs.

During exhalation, the diaphragm relaxes which helps in forcing the air out of the lungs.

Ventilation can also be a voluntary action, controlled by the cortex, such as when we hold our breath or blow out candles. 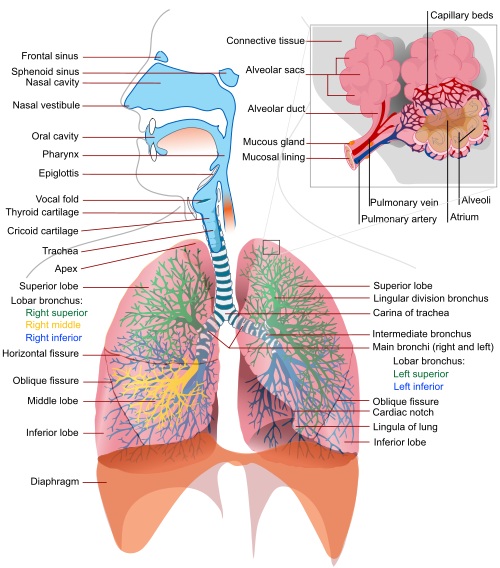 Another function of the respiratory system is vocalization. The process is how humans are able to make sounds and speak as air passes through the larynx and makes the vocal cords vibrate.

The respiratory system keeps the blood oxygenated in order to maintain life. In general, humans can only live around three minutes without air before starting to suffer organ failure or brain damage. In addition to air, people need nourishment. The next lesson explains how the digestive system extracts nutrients from the food we eat to keep the cells fueled.