One of the necessary conditions for life is having some sensitivity to the surrounding world. The senses are the sources of receiving all that information for the human body by connecting the nervous system to the external environment.

There are five recognized senses: sight, smell, hearing, taste, and touch. They provide stimuli to the central nervous system through organs comprised of specialized cells with receptors. The five main senses are also responsible for hunger, thirst, and balance.

Stimuli that are consciously perceived in the cerebral hemispheres are called sensations.

Generally speaking, sensation refers to being aware of external or internal conditions of the body. The state of being aware of something through the senses is perception.

There are four conditions needed for sensation:

Sight is the most developed human sense and provides the brain with more data about the external environment than all the other senses combined. Scientists estimate that half of the information in the conscious mind enters through the eyes. Our vision is so refined that by the time we are nine years old, we can instantly interpret the objects in our environment.

The human eye can distinguish over 16 million shades of color. Most people have a 180 degree field of sight with binocular vision, meaning we see through two eyes, and we perceive in three dimensions. All of this is possible because of our eyes.

The eye is a specialized structure for the reception of light and is considered the most complex organ in the body. Its function is aided by the eye brows, eyelashes, eyelids, and lacrimal apparatus, which produces tears and drains them from the surface of the eyeball.

The eyes are situated in sockets of the skull. They are attached to the sockets by six muscles. Each of the muscles moves the eye to one of six cardinal positions: right, left, up-right, up-left, down-right, and down-left.

The parts of the eyes include:

Sclera. The white part of the eye, the sclera, is a tough, opaque tissue that serves as the eye’s protective outer coat.

Iris. The colored part of the eye, the iris, is a membrane responsible for controlling the diameter and size of the pupil.

Pupil. The pupil allows light to enter the eye.

Tear ducts. Located in the corner of each eye, tear ducts drain your tears, which are produced by the lacrimal gland.

Cornea. This is the transparent dome-like window at the front of the eye.

Lens. A transparent disc of tissue, the lens changes shape depending on whether you are looking at something close up or far away.

Vitreous humor. Located behind the lens, the vitreous humor is a clear, jelly-like fluid that fills most of the eye.

Retina. This is the multilayered sensory tissue that lines the back of the eyes, composed of light-sensitive cells called rods and cones.

Fovea. The fovea is the region of sharpest vision, located at the center of the retina.

Rods. The rods are not sensitive to color, but have a greater sensitivity to light than the cone cells. They function in low light and are responsible for peripheral vision and night vision.

Cones. The cones are sensitive to color and are located in the fovea. They only operate in brighter light, and are responsible for clear images.

Optic nerve. The optic nerve connects the eye along a pathway to the brain.

Zonular fibers. Also called zonules, these fibers connect the lens to the rest of the eye.

Ciliary Muscle. This relaxes the zonules so that the lens can change shape for focusing. 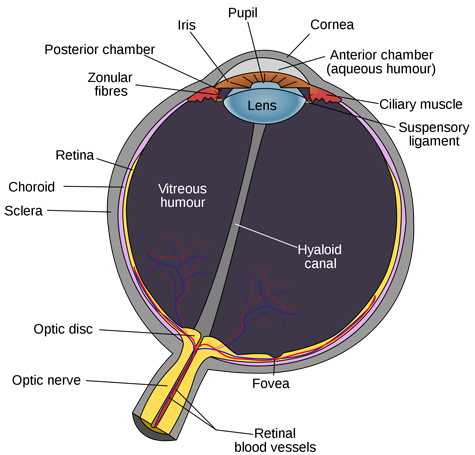 Inside the eye is a large interior cavity that is divided into two parts, anterior and posterior.

The anterior cavity is located in front of the lens.

The posterior cavity encompasses the area posterior (behind) to the lens and is filled with the vitreous humor. Vitreous humor helps maintain sufficient pressure to prevent the eyeball from collapsing.

The anterior cavity is subdivided into anterior and posterior chambers.

The anterior chamber is the space in front of the iris and behind the cornea.

The posterior chamber is a small space directly behind the iris, and in front of the lens. Both chambers of the anterior cavity are filled with a clear, watery fluid called aqueous humor, which helps to give the cornea its curved shape.

The eyeball is composed of three layers. The sclera is the outer, protective layer of the eye that extends from the cornea to the optic nerve at the back of the eye. The sclera gives the eye its white color. The exposed sclera is covered with a mucous membrane, the conjunctiva, which is a continuation of the inner lining of the eyelids.

The choroid is between the retina and sclera and is composed of blood vessels that nourish the back of the eye. The main purpose of the choroid is to send oxygen and other nutrients to the retina.

Within the choroid there are four different layers. Haller’s layer is the outer portion that contains large blood vessels, while Sattler’s layer has medium-sized blood vessels. Choriocapillaris contains all the capillaries, and Bruch’s membrane is the innermost section of the choroid.

Light enters the eye at the cornea, which bends the light rays which are then focused by the lens, which turns the image upside down. The rays pass through the vitreous humor and project the upside down image on the retina lining. The retina converts the light rays into electrical impulses that proceed to the visual cortex of the brain by way of the optic nerve. The brain turns the impulses into a three-dimensional image and also lets us see the image right side up.

The body produces three kinds of tears: reflex, continuous, and emotional. Each tear type has a different role.

Reflex tears clear irritants out of the eye.

Continuous tears keep our eyes lubricated. These tears contain lysozyme, a chemical that acts as an anti-bacterial agent and protects our eyes from infection.

Emotional tears contain stress hormones which get excreted from the body through crying.

Dr. William Frey, possibly the world’s foremost expert on tears, discovered that emotional tears shed hormones and other toxins which accumulate during stress. Additional studies have suggested that crying stimulates the production of endorphins, hormones which are natural pain killers and can promote feelings of euphoria.

The ear enables us to hear, which is considered our second most developed sense, although it was the last to evolve. The human ear can perceive a range of frequencies from 16 to 28,000 cycles per second, which correlates with sounds from a deep bass to a high squeal. 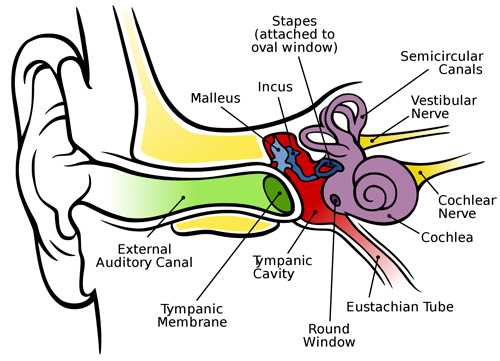 The pinna, or outer ear, is shaped like a cup so that it can direct sounds into our ear canal toward the tympanic membrane, which transmits vibrations to the inner ear, or cochlea, through three small bones in the middle ear: the malleus, the incus, and the stapes, also known as the hammer, anvil, and stirrup. The cochlea is a spiral-shaped structure covered by nerve fibers which turn the vibrations into impulses that are sent to the brain through the auditory nerve. The brain combines the input from each ear to determine directionality of sounds.

The inner ear also contributes to our sense of balance and spatial orientation. The inner ear has chambers filled with a viscous fluid and small particles called otoliths containing calcium carbonate. The movement of these particles over small hair cells in the inner ear sends signals to the brain that are interpreted as motion and acceleration.
Equilibrium
The act of equilibrium takes place where the vestibule and the semicircular canals are located in the ear. The receptor cells in this region respond to two kinds of motion which affect our sense of balance:

1. Static Equilibrium holds the position of the head in place as the body moves (for example, standing up or starting to run).

The Connection between Taste and Smell

The receptors for taste (the gustatory sense), called taste buds, are located primarily in the tongue but can also be found in the roof of the mouth and near the pharynx. The receptor cells in taste buds have gustatory hairs protruding out of the taste pores. They are able to detect the four traditional tastes: salty, sweet, bitter, and sour. In 1985, a fifth taste, umami, was formally recognized to describe the taste of glutamates and nucleotides. Umami is sometimes considered to describe savoriness.

In general, different taste buds are distributed on specific areas of the tongue. Those that recognize sweet are clustered at the tip, bitter at the back, salty on top, and sour on the sides. At the base of each taste bud there is a nerve that sends the sensations to the brain.

The nasal cavity is lined with mucous membranes that have chemoreceptors, which can detect a range of scents, including camphor, musk, flower, mint, ether, acrid, or putrid. The chemoreceptors are stimulated by vapor molecules and transmit the sensations to the brain through the olfactory nerve. 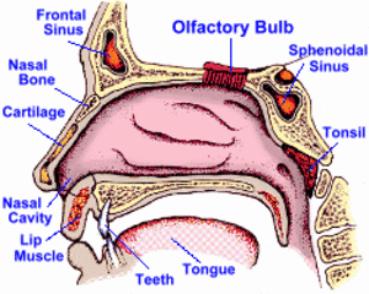 The nose also has a structure called the vomeronasal organ whose function has not been determined, but which is suspected of being sensitive to pheromones that influence the reproductive cycle.

Man’s oldest and most pervasive sense is touch. There are four categories of tactile sensation: cold, heat, pressure, and pain.

Most of the touch receptors are located in the second, lower layer of skin called the dermis. Every area of our skin can feel, although the most sensitive areas are hands, face, neck, tongue, feet, lips, genitals, and fingertips.

The body has about twenty different types of nerve endings that send messages to the brain, but the three most common receptors are temperature (heat and cold), pain, and pressure.

The sensory system, in collaboration with the nervous system, enables us to perceive and interact with our physical environment. The acuity of our senses varies from person to person, a function of genetics and in some cases environment. The next lesson discusses the endocrine system, which regulates our inner metabolic processes.

How sound is transferred to the inner ear

Previous Lesson
Back to Daily Module
Next Lesson