The digestive process produces waste products some of which end up as solid waste in the colon. However, certain waste remains in the blood. The urinary system filters out these waste products from the blood along with excess fluid. The resulting urine is expelled through the urinary tract. 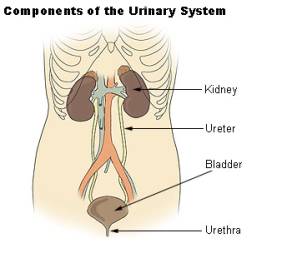 The urinary tract is a pathway that includes:

The kidneys are bean-shaped organs located near the middle of the back, just below the rib cage. These organs have multiple functions: they keep chemicals, such as potassium and sodium, in balance; they help regulate blood pressure; they produce erythropoietin, a hormone that controls red blood cell production in the bone marrow; and they remove urea from the blood. 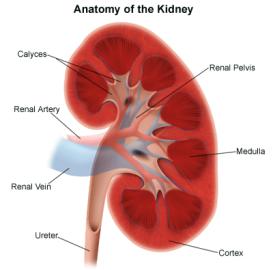 When there is more protein in the body than is needed, amino acids are broken down in a process called deamination. This usually occurs in the liver. The break down of amino acids produces a type of nitrogen waste called ammonia (NH3). Ammonia is extremely toxic to humans so if it were allowed to accumulate, it would be fatal. Therefore, the enzyme ornithine in the liver uses carbon dioxide to convert ammonia into urea. Urea is also toxic, but the body can tolerate it much more than it can tolerate ammonia.

The process of producing urea is called the urea cycle. A full cycle:

Although our bodies cannot tolerate high concentrations of urea either, it is much less poisonous than ammonia.

Adults eliminate about a quart and a half of urine each day, although the actual amount depends on how much food and liquid is consumed. How much fluid is lost through sweating is also a factor.

The kidneys remove urea from the blood through tiny filtering units called nephrons, each of which consists of a ball of blood capillaries called a glomerulus, and a small tube called a renal tubule. The glomerulus is surrounded by the Bowman’s capsule, which acts as the waste filter.

A tubule leads away from the Bowman’s capsule, becoming coiled. The coiled portion is called the proximal convoluted tubule that takes on a U shape, known as the loop of Henle, which scientists believe helps recover water and sodium chloride from the urine. This process produces more concentrated urine, which in turn lessens the amount of water we need to drink.

Each kidney contains about one million nephrons. Urea, along with water and other waste substances, forms urine as it passes through the nephrons and down the tubules.

From the kidneys, urine is moved by muscle contractions down two tubes called ureters to the bladder. Small amounts of urine are emptied into the bladder from the ureters approximately every 10 to 15 seconds.

The bladder is a hollow organ located in the pelvis that stores urine until it is expelled through urination.

A healthy bladder can hold up to 16 ounces of urine comfortably for 2 to 5 hours. Sphincter muscles keep the opening of the bladder into the urethra closed to prevent urine from leaking out.

The internal urethral sphincter is located at the bladder’s inferior end where the urethra meets the urinary bladder. It is made up of smooth (involuntary) muscle and it prevents the release of urine.

The external urethral sphincter muscle (sphincter urethrae) is a secondary sphincter that controls the flow of urine through the urethra. It is made of skeletal (therefore voluntary) muscle.

During urination, the brain prompts the bladder muscles to contract in order to squeeze the urine out of the bladder. Simultaneously, the urethral sphincter muscles relax.

The urinary system rids the body of potentially lethal ammonia by converting it to urea which is filtered out of the bloodstream by the kidneys. Without functioning kidneys, the body would quickly die of uremic poisoning.

In the next lesson, we’ll discuss how the reproductive system creates new life.