Introduction to Anatomy and Physiology

Anatomy and physiology are the opposite sides of the same biological coin. Anatomy is the study of the body’s internal and external structures while physiology studies the function of those structures, both singularly and in conjunction with one another. 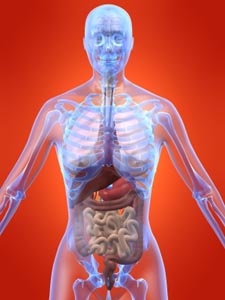 Anatomy, which is sometimes called morphology, provides a map of how a body is put together, human or otherwise. Physiology is akin to an instruction manual. Form and function must both be considered to fully understand the human body.

Within anatomy and physiology, there are several specializations, including:
It is believed that anatomy is the oldest medical science and was studied extensively by the ancient Greeks. This is why the etymology of many terms used in anatomy and physiology stem from Greek words. Although many of their early suppositions were incorrect, their observations laid the foundation for scientists who followed, such as Galen (129-199 AD), who correctly detailed the structural differences between veins and arteries. He observed that muscles contracted in response to a stimulus originating in nerves, and demonstrated that arteries carried blood, not air as was popularly believed. Unfortunately, Galen was so revered that nobody challenged any of his conclusions, many of which were inaccurate.
All the sciences languished during the Dark Ages and little new knowledge about anatomy was discovered until the 16th century when Andreas Vesalius (1514-1564) published the seven volume De humani corporis fabrica (On the Structure of the Human Body), which included detailed drawings made from dissections. 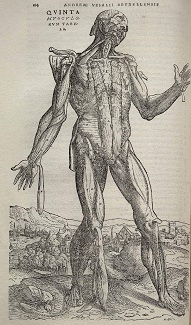 The book also pointed out Galen’s erroneous theories, which had been the accepted teachings for over a thousand years, so initially Vesalius was ignored by the scientific community.
It wasn’t until English anatomist William Harvey (1578-1657) published An Anatomical Treatise on the Motion of the Heart and Blood in Animals in 1628, which showed for the first time how blood is pumped by the contractions of the heart, that Vesalius’ work became widely accepted. 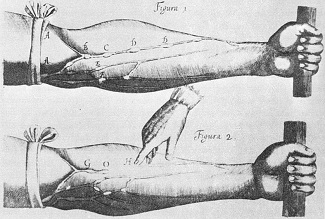 From that point on, doctors and anatomists considered both structure and function when investigating the human body. And as medical technology advanced, such as the development of the electron microscope, physicians and scientists were better able to identify and understand the structures and workings of the human body.

Today, digital scanners, magnetic resonance imaging (MRI), and other high-tech tools allow researchers to discover even more about human anatomy and physiology noninvasively. In this lesson, the organization of anatomy and its physiology will be outlined and defined.

The Major Characteristics of Life

Physiology is the study of living things, but what exactly does it mean to be alive? It is difficult to isolate a single characteristic that separates all living entities from non-living ones. For example, some might say that the ability to reproduce is a necessary trait to indicate life. But mules, which are definitely living offspring of a horse and donkey, cannot reproduce. So physiologists consider a number of traits that all living things have in common and thus identify life based on the following characteristics:

Everything that is alive, from cells to elephants, relies on homeostasis, which is the way the physiological systems work together in living organisms to maintain a stable internal environment, despite changing external or environmental conditions. In humans, that means regulating things like temperature, pH, hydration, and blood oxygen levels.

All living things also require some sort of metabolism, which is commonly understood to mean breaking food down and turning it into energy. But in physiological terms, it refers to the entire range of an organism’s biochemical processes. These metabolic pathways involve enzymes that transform one substance into another substance, by either breaking one down (catabolism) or creating a new one (anabolism).

Anatomists organize the human body into different levels, each level increasing in complexity.

Spatial Organization of the Human Body

To accurately reference the structures that they study, anatomists use positional and directional terms. To have a common standard for describing those positions of body parts, it is assumed that the person is in what is called an anatomical position: the body standing upright, feet together, palms facing forward. From this starting point, all the directional terms are relative to the anatomical position. 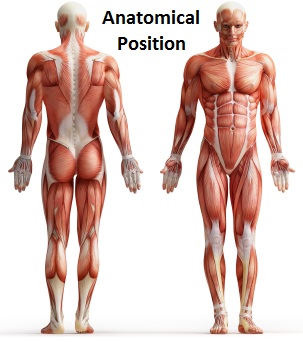 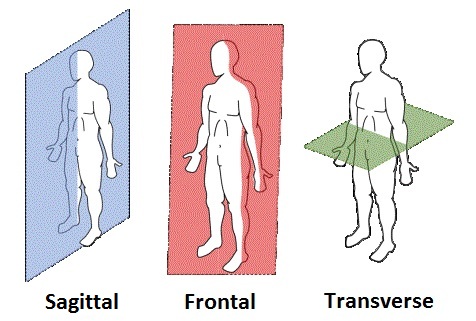 Additionally, the outer body is divided into two regions: the axial, which includes the head, neck, and trunk, and the appendicular which consists of the limbs.

The appendicular skeleton consists of the 126 bones of our extremities, legs, arms, hands, and feet, which facilitate movement.

The most general definition of a body cavity is any fluid filled space, including the digestive tract. Cavities can also have subcavities, much like the way smaller measuring spoons of a set fit into the tablespoon. The organs contained within a body cavity are called viscera.

The axial region of the body has two primary cavities: the dorsal and ventral. The dorsal cavity contains the cranial cavity (brain) and the vertebral column (spinal cord), both of which are on the dorsal or posterior side of the body.

The ventral cavity consists of the thoracic and abdominopelvic cavities. These two areas are separated by the diaphragm.

The mediastinum is the region located between the lungs that separates the thoracic cavity into right and left compartments. It holds the heart, thymus gland, and portions of the esophagus and trachea. Anatomists divide the mediastinum into the anterior, middle, posterior, and superior regions.

Other body cavities include the oral, nasal, orbital, and middle ear 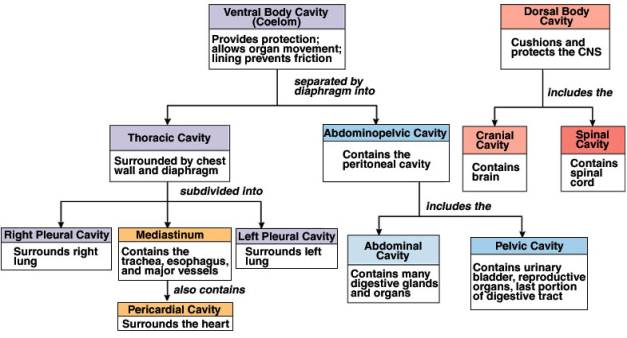 The peritoneum, the pleura, and the pericardium cavities are lined with a serosa, or serous membrane, which is comprised of a thin layer of cells that secrete serous fluid, a watery liquid that is rich in proteins and has a light yellow color. Serous fluids also act as a lubricant to minimize friction from muscle movement.

Organ systems are sets of two or more interrelated organs working together to perform a specific function. Below is a chart naming the system, its components, and its main function. All mammals share these same systems.

The body is a complex organism of cells, tissues, organs, and organ systems. While anatomy describes the structure of how it is physically put together, physiology explains how all the components of the human organism work, individually and together, to maintain life.

At the most basic level, we are the sum of literally billions of chemical reactions taking place every minute within the cells of our bodies. So understanding human physiology requires a working knowledge of basic chemistry. The next lesson will introduce the fundamentals of chemistry and include definitions of key chemistry terms that pertain to physiology.

Intro to Structure & Function of the Body

Previous Lesson
Back to Daily Module
Next Lesson